The Life and Times of a Doctor Who Dummy

Illustrated with colour and monochrome photographs throughout 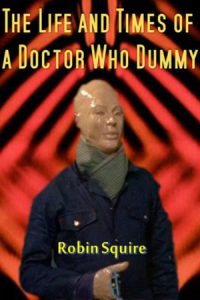 Robin Squire: “In the book I use diaries and memories to weave anecdotes about colleagues on both sides of the camera. They include my boyhood hero Jon Pertwee, director Derek Martinus, Terrance Dicks, Derek Sherwin, Peter Grimwade, Christine Rawlins, Stan Spiel, Nicholas Courtney, Caroline John and other Doctor Who greats, including Tom Baker. I met Tom later, and worked with him in an easy-to-miss-if-you-blink role on Logopolis, as well as appearing in extremely small (I like to think of them as beautifully formed!) parts in The Daemons, Full Circle and others.”

“The Life and Times of a Doctor Who Dummy really began for me when I hitch-hiked to the South of France, and experienced Beatlemania in an echoing public hall in Nice. I returned to a vibrant ‘swinging’ London of psychedelia, bedsits, mini-skirted ‘birds’ and a house I shared with other lads near the Portobello Road. With an anguished German girl we watched on black and white TV as England kicked the daylights out of her country’s team in the 1966 World Cup.

“I wrote my debut novel and saw it published (Square One, about the pop scene), and a young DJ called Terry Wogan interviewed me on radio. I became a husband and father for the first time. As a crazy consequence of all this I found my surprised self attached to a BBC TV show. The show was out of favour with BBC executives, and in urgent need of a re-boot. It was called Doctor Who.”

“I was the director’s helper in the first colour transmission of the Doctor Who story Spearhead From Space. Spearhead was also the only serial of the Time Lord shot entirely on film. Unexpectedly, I was pressed into service as the main Auton. So I became the first Doctor Who alien to appear in colour on British television. Throughout the shoot I also worked as the unit driver and general gofer, which provided a rich hoard of material to work on.”