Transcribed and Edited by Robin Squire

48 pages on glossy A5 paper 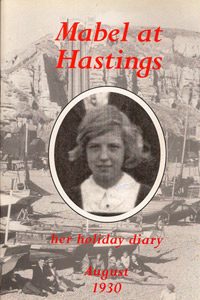 From Kew To Hastings

Rich in historical observations, it is a detailed account of Mabel and her best friend Dorrie’s summer holiday visit to Mabel’s aunt at the seaside, from their homes in Kew near London. Mabel celebrated her 14th birthday during their stay. It is a charming cameo, wonderfully evoking the atmosphere of the era between the First and Second World Wars: how the girls amused themselves, what they wore, and what they ate.

The diary makes fascinating reading, enabling teenagers and adults to compare teenage holidays today with those of the 1930s. It is a glimpse into teenage life without smartphones, computer games, Facebook, Twitter and television.

Within five years of the holiday Dorrie would die in tragic cicumstances, and Mabel would be married, with the first of six children on the way.

Extract from the Introduction

On the Saturday morning of August 2nd 1930 when Mabel Floyd picked up her best friend, Dorothy Carvill, from the King’s Head public house in Richmond where Dorrie’s parents were the licencees, to go off to Hastings for four weeks’ holiday, she was still 13 years old… In the Richmond and Twickenham Times published that day the ‘Twickenham’ type of quality houses, currently being built, are advertised at £945 Freehold each. On this, the last day of Bentall’s sale a lady’s ‘Afternoon dress’ is down from 20 shillings (£1) to 5 shillings (25p). A made-to-measure suit can be had for 5 guineas (£5.25p) at Vivian Richfield’s on Hill Street.

When we were on the West Hill some boys ran away with our hats. Thought it attractive I suppose. Dorrie went after hers & socked one of them under the jaw, but missed. I went after mine. They ran away, & dropped the hat. It was all bent up. They waved a handkerchief to me. Afterwards we found out that it was Dorrie’s. If they hadn’t run away – cowards – I would have given them one each all round!